This is the 4th part of a series of posts about the nominated albums for the 2016 Gramophone Awards. You’ll find the rest of the series here.

I’ve written quite a bit about chamber music on my blog already, it is one of the most beautiful and intimate forms of classical music.

I’ve only recently “discovered” François-Frédéric Guy for me, in his album of the Brahms piano sonatas, reviewed here. As you can see from that review, I was really impressed with wh

Xavier Phillips was another new name to me (which also tells me I’m not reading Gramophone with enough attention, given that all of these award-nominated albums obviously were previously praised by Gramophone).

The catalogue of complete Beethoven cello recordings has seen two recent excellent addition in recent years, with the excellent Steven Isserlis and Robert Levin on fortepiano (Gramophone Award finalist in 2014) on Hyperion, and even more recently Jean-Guihen Queyras and Alexander Melnikov.

So do we need yet another new recording? Well, while this new album doesn’t replace Isserlis and Queyras, it is certainly a strong contender.

As said before, I really liked Guy on Brahms, and his transparent, clear style works very well here. Phillips has a beautiful tone, and this recording, while very singing, has also a certain etheral style to it. Very much worth checking out.

As much as I love the Klimt on the cover, I’ve tried over and over again to get used to this kind of music, but haven’t managed. It’s just not my cup of tea. I can listen to Berg’s Violin concerto occasionally, but beyond that, the only thing I want is find my Ipad remote and turn back to Beethoven or Brahms as soon as I can.

Given my complete lack of competence and understanding here, I’ll just shut up and let you make up your own mind (you’ll find the Qobuz links below).

Now we’re getting back to a composer I absolutely love (see also the subtitle of my blog). 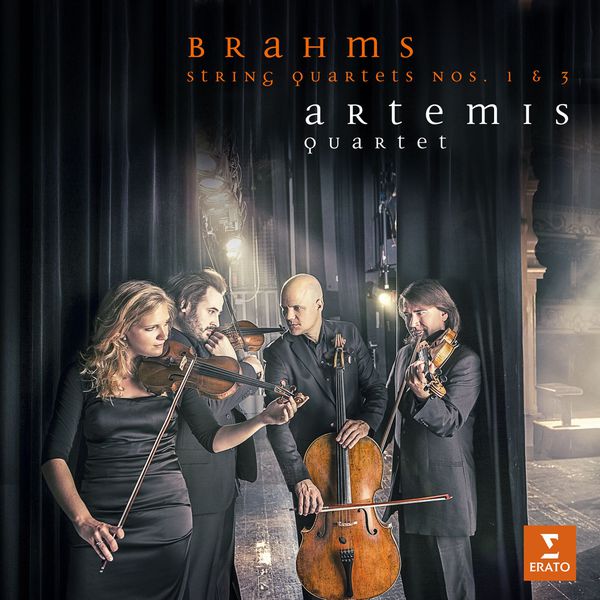 Now to the bad news: I personally think that Brahms’ String Quartets are among his weakest contributions to the genre of chamber music. I love everything he did with piano (naturally, he was a very good pianist), I like his string sextets and quintets already a bit less, and I never got to like the string quartets.

But you don’t care about that, you care about what I think about their playing? Well, here’s the problem: If I don’t really like the music, my judgment is clouded at best. Sure, they do a fine job, but the entire thing just doesn’t touch me enough. So this will be another one where I refrain from any rating. Just so much: If you unlike me like the Brahms quartets, it’s worth checking out (which you probably would have guessed without me as well).

You may, like me, rub your eyes and ask yourself if you just ended up in the wrong section. No this is not “orchestral”, we are in chamber music.

I must admit somewhere in the back of my head I had heard Bruckner did some Chamber music, but seriously had never heard it before. I could double check this fact, as my pretty large digital library doesn’t contain a single recording of these works.

Well at least I’m not alone, even the 30M+ library of Qobuz only features a very small handful of recordings of this work.

Now the problem: The Fitzwilliam has recorded on Linn Records. While this usually means you get excellent recording quality, it also means no streaming.

Now, from the couple of other albums available for streaming of these works I must admit I haven’t made up my mind if I care enough about them to buy this new album (currently I rather don’t think so). Don’t get me wrong, I love Bruckner (see here), but I’m not sure his chamber music is for me.

So another album without any rating from my side. Sorry.

NOW we’re talking. Already reviewed here, and I can only reiterate my strong 5 star rating here. Just go, get it!

Who? Could you repeat that name?

Well I shouldn’t brag, rather shut up, this just shows again how ignorant I am in 20th century music.

So, who should win?

Well, if you’ve read so far, you’ll have noticed that I’m rather biased this time (ok, all the time), and actually would give the Award without hesitation to the Quatuor Ebène.

Well, but I’m not Gramophone, and knowing the three finalists the jury there has chosen (they were released some days ago), I know they won’t make it. The Beethoven, my other favorite, is out as well.

Basically, the Emerson Berg, the Artemis Brahms, and the Heath Tippett are in the final selection.

Well, over and out for me at this stage. Let Gramophone’s jury do their job.