2016 has been a very bad year for me posting-wise so far. Last year I was usually able to stick to my self-imposed posting schedule, of about 2 per week.

Since the beginning of the year this frequency has plummeted. Sorry for that. There is a couple of reasons involved, too much business travel, late nights at the office, some long week-ends / short vacation, and most recently, a nasty gastro-intestinal flu that isn’t fully over yet. Plus there’s been a bit of a writing block on the occasional days that I could have written.

Well anyhow, I really hope you should be able to read my posts more often in the future, fingers crossed.

Thanks in any case for your loyalty, my dear readers. Very much appreciated.

Yes, I’ve written about it before. Schubert’s string quartet, to me personally the highest peak that chamber music ever reached (sorry LvB fans).

So there is obviously no need to talk about it again.

Well, actually there is. The reason is called Quatuor Ebène. This French quartet is noteworthy not only for being one of the leading classical string quartets of our time, but also do crossover, i.e. interpret Jazz and contemporary musical classically.

I must admit the term crossover usually makes me run away as fast as I can, as it is usually just horrible André Rieu / David Garrett / Vanessa Mae etc. trash (sorry, but I really can’t help it, that’s about the only word that expresses what I feel about this stuff).

But obviously to every rule there is an exception. Ebène is one of the few classical artists to really pull this off well! 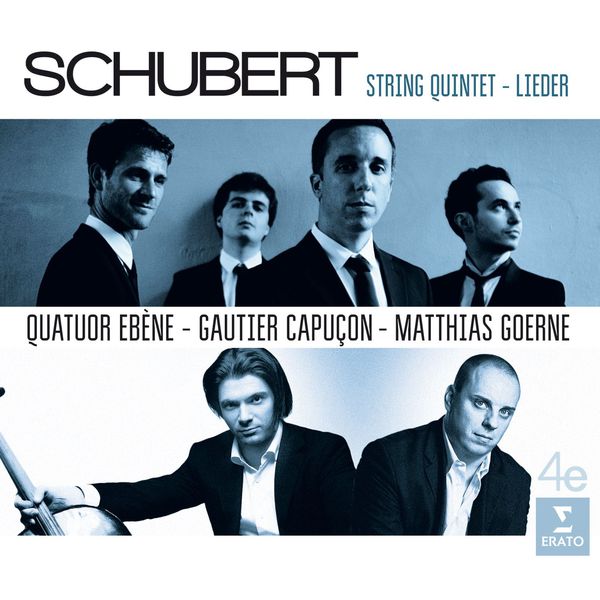 I would have checked out this album even without a “Choc” from Classica and an Editor’s Choice recommendation by Gramophone. But obviously, having the highest possible endorsement from both of my favorite classical magazines helped.

Let’s write about the Quatuor first. They are joined by Gautier Capuçon on 2nd cello. Gautier is the younger brother of the well-known violinist Renaud.

So what makes this recording so special? Two words spring to mind, rough and fresh. Rough isn’t meant that this is not high quality playing, far from that. But there is a real direct quality in the playing, that let’s you notice all the little angles and details than more polished recordings.

I’ve mentioned the energy that sets apart the Pavel Haas Quartet’s reading. You’ll find some of this here, but overall this is even more “chamberesque” (is this a word?) and intimate in this reading with Ebène.

This recording never just let’s you enjoy it, this album forces you to live the music.

The String quintet is already nearly 1h long, so many other artist would have just stopped there. Here however, you get an interesting bonus. Schubert is obviously famous for his Lieder (songs), and many of his chamber works are inspired by his songs (e.g. Death and the Maiden, see also here).

Usually, these songs have a piano arrangement. I must admit, I’ve never heard them with a string quartet supporting the singer. Well, here we go. And obviously, you don’t just get any kind of singer, you get Matthias Goerne, a Schubert legend. It is surprising how well this works. This is really way more than just a filler.

My rating: 5 stars – absolutely worth checking out, even if you already own the Haas or another reference version.

You can find it here (Qobuz) and here (Prestoclassical)