I’ve shared my admiration for the German pianist Michael Wollny several times (see here, here, and here for example), and have also mentioned him in my 25 Essential Jazz albums.

I’ve also already written about the Finnish pianist Iiro Rantala previously (see my review of Anyone with a Heart here).

Leszek Mozdzer from Poland is the only artist I haven’t written about yet, but his album Komeda is very much worth checking out.

As regular readers of my blog will have seen, I was quite a regular visitor at the Berlin Philharmonic concert hall, but I’m quite sad I missed this particular pan-European concert evening that was recorded live in 2016. 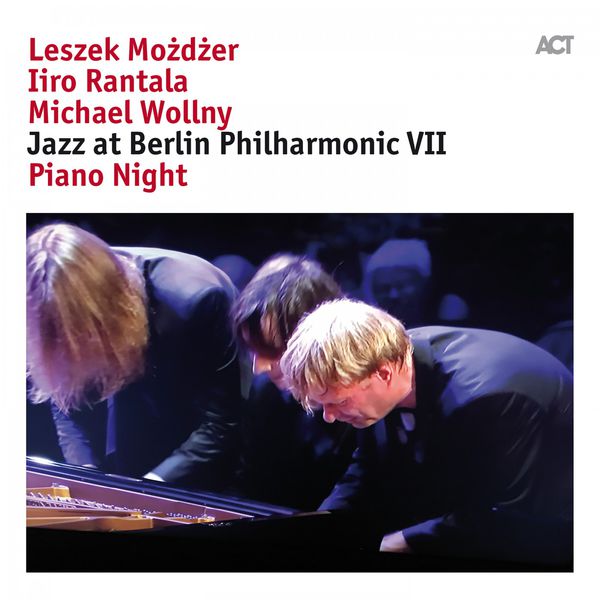 Let me start with the highlight of this album: Chick Corea´s La Fiesta, from his legendary Return to Forever album. I’m very sure Corea would endorse this fantastically energetic live version. There is one Fender Rhodes electric piano involved, similar to the sound of Corea´s famous 1970s band. It is hard to tell just from listening who plays the Fender, but the booklet makes it clear: the three actually take turns!

Highlight number two is another Jazz standard, Gershwin´s Summertime, in a fantastic version.

But don’t expect the other songs to be of any lower level, from the very first second you’ll get absorbed by three outstanding musicians who clearly have a lot of fun together. Some of the previous tracks are originals. Rantala contributes Freedom, and Mozdzer She Said She Was A Painter.

If you like energetic piano jazz, this album is highly recommended.

You can find it here (Qobuz) and here (Prostudiomasters).

If you don’t like downloads, you’ll need to go with the 180g vinyl pressing, as this album is not available as a regular CD.

Yes I know, this is a very unusual combination. You get Iiro Rantala from Finland, formerly with the Trio Töykeät, Adam Baldych on Violin, and Asja Valcic on Cello.

But don’t get scared, this is worth exploring!

Iro Rantala String Trio: Anyone With A Heart (ACT 2014)

Well, first of all, is this Jazz? Honestly, no idea. Rantala has studied not only Jazz, but also classical music, and is a proclaimed Bach fan. In any case, it is fascinating music, all composed by Rantala himself.

One of my favorite tracks is Freedom, inspired by Jonathan Franzen’s novel (which I never really liked by the way). Here he dampens the piano to get a very particular sound. The strings even have oriental elements in their playing. All this is driven by a constant groove, that pulls you in and lets you sit on the edge of your chair. Here’s a video of Rantala performing a solo version of Freedom in his own place, to give you an idea what to expect:

My other favorite is the ballad Alone, that prominently features the beautiful sound of Valcic’s cello.

Again, this track probably isn’t what you’d call typical Jazz. I couldn’t care less. This is music that escapes traditional categories and genres, but is beautifully played by musicians who are in it with all their heart.

This is worth exploring if you’re looking for something different.