I’m not an audiophile

OK, that statement is only partially true. I do care about the sound quality of my music, I have a mid-level speaker system and a high end headphone setup, and I did spend some time in hifi-shops figuring out which gear I like. I’m a man, and we like our toys.

But I still wouldn’t call myself an audiophile. This special category of nerds (nothing wrong with that, I’m certainly a classical music nerd as witnessed by me doing this blog) that just love tinkering, speaking about gear, and in some extremes would rather listen to the latest “audiophile” recording even if the music is mediocre (Jazz at the Pawnshop, anybody?).

That’s how my blogger name came to be, I called myself “Musicophile” as opposed to “audiophile”. And you’ll see that on this blog I’m pretty much exclusively writing about the musical qualities of the albums I discuss, and only rarely comment about the recording quality.

But every once in a while you’ll find recordings that are both a musical and an audiophile delight, so let me break my own rule and start 2022 after a 2 month hiatus (due to a lot going on at my day job) with one of those.

This recording is actually now 40 years old, it was recorded at a club in Florida back in 1982. It has recently been re-released in 2 formats, a regular 24/96 high-res remaster that already sounds really nice, and then in the format I’ll be discussing here, from the small audiophile table 2xHD. They are doing a rather complicated audiophile voodoo treatment of a small catalogue of recordings. Other excellent examples of albums from them I own are remasters of the outstanding Brahms violin sonata and trio recordings with the Tetzlaffs which I’ve yet to review on this blog, as well several excellent Bill Evans albums.

I’ll leave it to the audiophile nerds to describe the impact of the 2xHD treatment, suffice it to say that the 2xHD version sounds a bit “smoother”, more “analog”, and somewhat warmer, without loosing detail, compared to the regular remaster. Your choice if you care about these nuances or not

But enough audiophile mumbo jumbo, what about the music, you ask?

Well, it’s a really interest setup, we’re talking about a traditional piano trio, with Paul Berner on bass and Duffy Jackson on drums, but we get the addition of a percussionist here, the excellent Robert Thomas, Jr.

Alexander is originally from Jamaica, and adding a percussionist really adds something very special here, setting it apart from regular trio sessions.

First of all, to quote Duke Ellington, It Don’t Mean A Thing If It Ain’t Got That Swing, nothing to worry about here, there’s plenty of swing, if you can listen to this without tapping your foot to the fast numbers, you must be deaf.

But on top of that you get outstanding latin jazz numbers, such as Samba di Orfeu, or Fungi Mama where Robert Thomas, Jr. really shines, and you get a really interesting example of Jazz/Reggae fusion with Reggae Later. The only thing you won’t find on this album is intimate ballads, but well, we’ve got plenty of Bill Evans albums for that already

Overall, this is a truly enjoyable and somewhat special live gig, that you’ll particularly appreciate if you have decent playback equipment, but will get your foot tapping even if played over a $50 bluetooth boombox.

You can find the recording with the 2xHD voodoo in formats all the way up to DXD here (NativeDSD), or you can go to the regular high-res version here (Qobuz)

For whatever reason, although I really like piano trios as every regular reader of my blog will have understood by now, Monty Alexander flew under the radar screen for me until rather recently

Luckily, some other music lovers pointed me to him, and the trigger for purchasing this particular album was fellow Jazz addict JoeWhip’s entry to Audiostream’s Lovely Recordings, a new feature on the site:  (The rest of his list is also very much worth exploring, I had a bit more than half of it already and purchased most of the rest after reading the list). 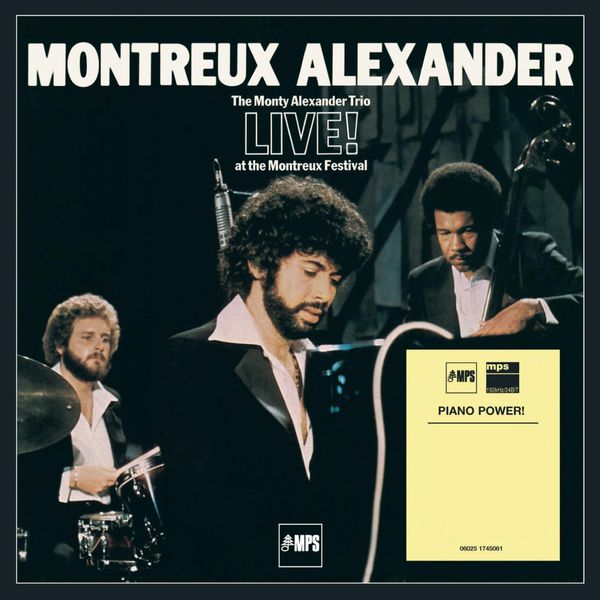 What a nice recommendation!

Live albums often are either really good or really dull. The dull ones often just try to hard, or don’t really capture the spirit and feeling of the concert and leave you uninvolved. The good ones are just the opposite.

Luckily, the latter applies here, you feel like you’re actually sitting in the concert and the groove get’s you immediately.

Jeff Hamilton is a great asset obviously, his ability to make any kind of music swing is just outstanding (he also plays, in a very similar style on Ray Brown Live At the Loa, one of my 25 Essential Jazz albums).

John Clayton is not that well known, but he is a Ray Brown pupil and you can hear it.

I can only agree with JoeWhip on his assessment that this is music that will make you smile no matter how down you are.