Did I mention that I love Murray Perahia? Yes, actually, I did. He’s mentioned in my Top 10 Favorite Classical Pianists, his recent Bach Album made my Top 5 Classical Music albums of 2016.

So when a new Beethoven album from the great master came out on Deutsche Grammophon, I bought it pretty much immediately, without checking out the version via streaming as I’d typically do otherwise. His latest Beethoven sonata recording dates back to 2008, since then he’s been much more focused on Bach. 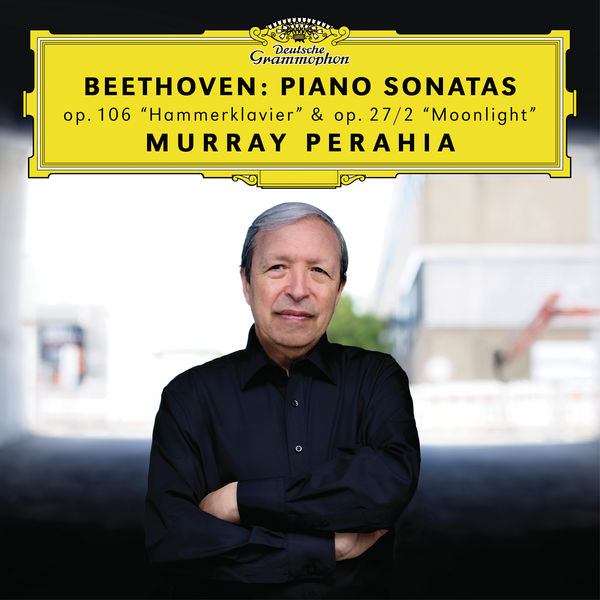 Perahia attacks two of the most famous Beethoven sonatas here. No. 29, Hammerklavier, and the one that even non-classical listeners would recognize, the Moonlight.

Let me start by saying you immediately hear that Perahia has been playing a lot of Bach recently. If I had to summarize this album in one word, it would be “Clarity”, or “Transparency”. The counterpoint complexity of Bach certainly shines through on this album. Nothing is ever “too much”, even for these two sonatas that both mark the transition from the “classical” period to the starting “romantic” era.

Let’s start, as Perahia does, with the Hammerklavier heavyweight. This is one of the most pianistically challenging piano pieces out there. Especially if you’re trying to follow Beethoven’s original metronome marks, which some have considered unplayable. Perahia starts with a quite ambitious speed, but at no point this ever feels forced.

You get plenty of nuances especially in the beautiful Adagio, and the highlight could be the last movement, which stars seemingly simple with a little Largo, but then builds into a compex fuga type Allegro & Presto, where you can clearly hear that Beethoven knew his Bach, so Perahia really shines here.

I have yet to find my “perfect” Hammerklavier. Recently, the impressive version of Ronald Brautigam (played on an actual Hammerklavier-type historic instrument), or Igor Levit’s beautiful recording of the late sonatas, or you can obviously go back to the classics and pick your Serkin, Brendel, or Arrau. Actually, the complexity of this masterpiece is such that no one version will ever be “perfect”, you’ll always need more than one interpretation of this jewel.

Going to the Mondschein sonata, I’m going to contradict myself immediately: This could well be “the” perfect version of the Moonlight sonata, at least of the world famous Adagio sostenuto.

Let me explain: He takes the movement relatively fast, with 5:16 I have only 3 versions in my library that take less time (my fastest version is Schnabel by the way, with 4:51).

What is so outstanding about this version goes back to the word I used earlier, “clarity”. This is played in a very plain, no-nonsense style. With such an overloaded romantic piece, there often is a tendency of just doing a bit too much, too much rubato, too much dynamic variation, etc. etc.

But honestly, this outstanding beauty of masterwork doesn’t need any of this. This apparent simplicity is just what makes this music truly shine. I can’t get enough of it. This could well become my new personal reference for No. 14.

UPDATE Feb 28, 2018: For once, we have an album where all critics agree. In their respective March editions, both Gramophone (Editor´s Choice & Recording Of The Month) and Classica (CHOC) give this album their highest rating.

7 thoughts on “Murray Perahia Plays Beethoven Sonatas – Could This Be The Best “Moonlight” Ever?”