Antonio Vivaldi and The Four Seasons

I’ve mentioned previously that I’m not a very big Vivaldi fan. On my personal scale, Bach and even partially Händel are miles ahead of the Red Priest. I wouldn’t go as far as Stravinsky who said Vivaldi had written the same concerto 400 times, he has a point though.

But obviously, you just HAVE to have a version of the world most famous program music, the Four Seasons, in any decent record collection (or music collection to be more generic, does anybody still collect records out there?).

Obviously this has been overplayed to death. But if you haven’t listened to it for a while and actually give it a go again with a fresh ear, there are many beautiful elements in there that makes it worth going back to it occasionally. On my personal playlist it appears about 1 per year.

How to choose a version

Obviously, this work has been recorded a gazillion times. I had chosen my personal preference, the recording by Carmignola below, some time ago after comparing about 20 versions. So take this with a grain of salt, obviously there are many other good recordings out there.

In any case, I was obviously very curious if it would appear in the Disques en lice selection, and how it would compare.

Unfortunately, exactly this recording didn’t appear. However, luckily for me, Carmignola actually recorded the Four Seasons twice, and his earlier recording with the Sonatori de la Gioiosa Marca was selected. I was surprised how close these two versions were, in spite of being recorded with 10 years between them.

In a nutshell, that program confirmed my clear preference for Carmignola. The three experts in the program liked it as well, but in the end found it a bit too middle of the road (and they have a point in a way) and preferred in the end the more extreme recordings by Diego Faso’s,  very theatrical, worth checking out, but a bit “too much” for me, and Midori Seiler with the Akademie für Alte Musik, a really good recording but I personally don’t like the sound of Seiler’s violin very much). 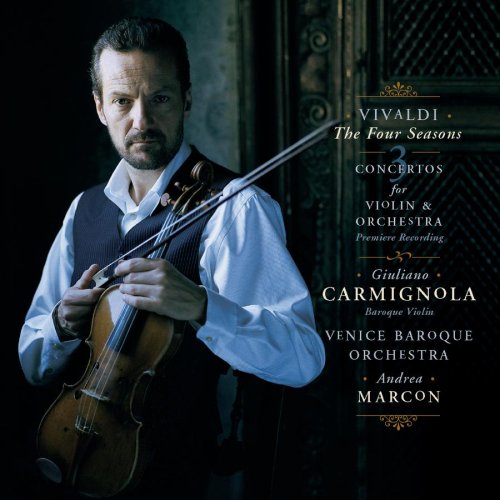 So what does Carmignola do? Well nothing special, just everything right, and very right. His Guarneri has a beautiful voice, and the Venice Baroque Orchestra plays with just the right level of energy, speed and drive, and a lot of transparency (which by the way luckily is very well recorded, so you get the same transparency transported very well).

Ah yes, and you also get two world premiere recordings of two previously unknown violin concertos as a filler. But in a way, we’re back here to Stravinsky’s 400 times the same, there don’t really disturb, but I really don’t feel you would have missed anything if these had stayed unrecorded for just a little bit longer.

My rating: Four stars (It’s a true five-star performance though, but I just cannot get myself to give 5 stars to Vivaldi, so just ignore the star rating and get it anyhow).

You can get it here (Prestoclassical) and here (Qobuz).