Blogging – but about what?

I suppose every blogger knows this question: what should I write about on my blog?

Well, you could say with several thousand albums in my personal library and 30M tracks in my Qobuz streaming subscription, finding material shouldn’t really be a problem. And it actually isn’t too much of an issue.

The harder question is often: What do I write about right now?

I often get inspired by either recent releases, by reading the specialized press, or by something I just happened to play on my stereo recently.

However, tonight I was a bit clueless. I knew it was time for another blog post, but didn’t really feel inspired about anything in particular.

Then the radio on my car trip back from work came to my rescue, as they played a track from the album below. I immediately knew I had to write about it.

So here we go:

Julian “Cannonball” Adderley is probably one of the more underestimated saxophone players. He never go the reputation of a Coltrane, Bird, or even Sonny Rollins. That said, he’s done some amazing albums. Not only he played on Kind Of Blue (see my post on my 25 essential Jazz albums), but also on Something Else from 1958 which has the best version ever of Autumn Leaves on it. Not to mention many other great albums, with or without Miles Davis.

Know What I Mean – Cannonball Adderley With Bill Evans (Riverside 1961)

Adderley and Bill Evans already played together on the above-mentioned legendary album Kind Of Blue in 1959. Two years later, on the Riverside label this time, they work together again, without Miles Davis this time. You have Percy Heath on bass, and Connie Kay on drums.

And the mood is completely different to Kind Of Blue‘s intimacy, this is swinging Jazz that will make you smile immediately. 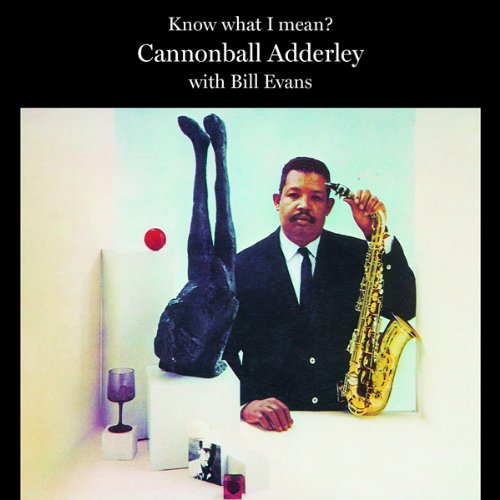 You start with the great Bill Evans standard Waltz For Debbie, a song I personally cannot get enough of. And this is probably one of the best versions out there, with Adderley really swinging like crazy.

Toy, a Clifford Jordan original, is another great uptempo track.

And then there’s the title track (which depending on which release you get, you may have several takes to compare), which starts as a beautiful ballad (Kind Of Blue‘s particular mood is popping up again), but soon turns back to softly swinging.

This is mainstream jazz (in the positive sense of the word) at its best.

You can find it here (Qobuz).