Another entry on Bach. Maybe I should add him to my Blog title.

In any case, I just had to write about the b-minor mass, as it is such a fantastic work of art, one of the absolute highlights of the entire classical repertoire in my view.

Again, if you want to know more about the history, I don’t feel like I need to copy Wikipedia here, the only thing that is a bit particular about the story of this mass is actually that it is a full traditional catholic mass, given that Bach was a protestant composer. Actually, Bach apparently never performed the full thing in one go during his lifetime.

Well we don’t need to care about these historic details, we can just sit back and enjoy this amazing beauty. It is pretty long, around 2h, but there is so much to discover that it is worth putting down our tendency of ADHD (and I’m the first to admit to that disease) and listen to it from back to back. If your ADHD is too much of an issue, just pick out parts, as JSB would have done during his time.

What is so special about this work (to give it its formal title “Messe in h-moll BWV232“, or as Carl Phillip Emanuel Bach called it the “Great Catholic Mass”? To me, it is most of all the overwhelming power. I’ve said before that I’m not religious, but  when I hear the choir sing the “Kyrie eleyson” (Lord, have mercy) with full organ backup,  I’m sometimes getting second thoughts. Or take the “Qui tollis”, how the choir interacts with the solo flute, or to give a final example, the beautiful glory of the “Sanctus”. Just amazing.

The first version I ever had of this was, as many other probably, Karl Richter’s legendary 1961 version.

There is still a lot of positives about this recording today, including the outstanding soloists (Fischer-Dieskau, anybody?). That said, a lot of time has passed since this version and the last 50 years have completely changed our reception of Bach and other Baroque works, thanks to the movement of “historically informed performance” by Harnoncourt et al. in the 1970s/80s.

Therefore, as much as I appreciate the sheer power of this version, I’m not going back to it that often.

Philippe Herreweghe (yes I know, again as well) has recorded the b-minor mass three times (to quote Herreweghe himself: “If at first you don’t succeed, try, try again”). All three recordings are very good, my preferred one by small margin is the last one from 2011 on his own label Phi. It was recorded in Berlin.

It just gives you the perfect balance, it is not over the top, but extremely intense.

Another excellent alternative, and my other favorite, is Frans Brüggen’s older recording from 1990 on Philips. 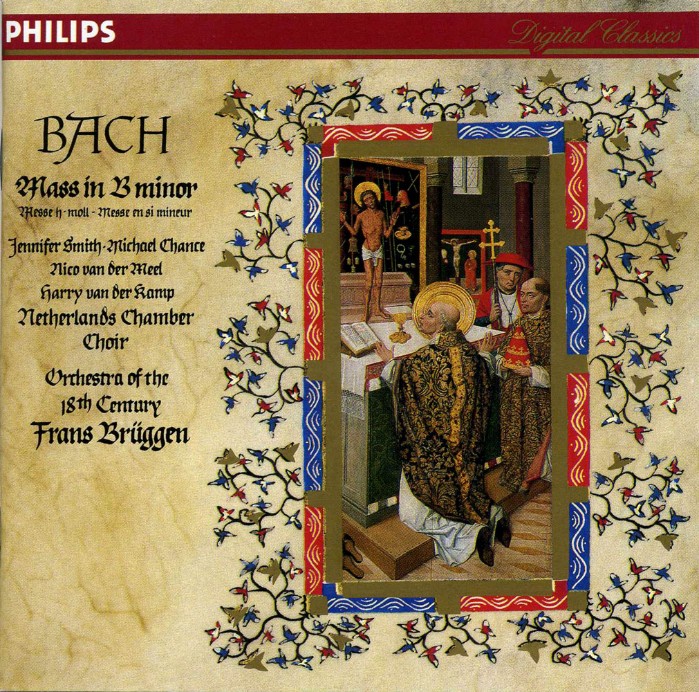 Obviously, there are many others that have done an excellent job, from Gardiner (see also here) to Hengelbrock, to Suzuki. But these two recordings are just one tiny notch above the very busy crowd.

5 stars for both recordings.

You can find the Herreweghe here (Qobuz)