Schumann’s symphonies have long been underrated. The idea of “Schumann cannot compose for orchestra” has been going around in musicology circles for many years.

I really disagree. OK, he’s no Beethoven or Brahms, but I still really like his symphonies, especially no. 3 and 4.

To be fair, there are excellent recordings already out there, e.g. from Gardiner, Nezét-Séguin, or, a bit more unorthodox, Thomas Dausgaard, (mentioned in My 25 Essential Classical Albums).

Rattle is now on his way out from the Berlin Philharmonic, with Kirill Petrenko coming.

I’ve not always been a fan of Rattle’s work at the BPO, but he has left some very good recordings, so I was very interested when I recently rediscovered this 2014 cycle which launched BPO’s own label (I had missed it at the time).

So, what do we get? Overall, a very convincing package. I really enjoy every single symphony on this box. My favorite is actually no. 1, subtitled “spring”; where Rattle takes a very fresh and precise approach.

Potentially the weakest of the 4 is symphony no. 2, which I found slightly incoherent in certain parts. The “Rhenish” (my other favorite), and no. 4 both are presented in a way that combines on one hand a good view of the big picture, but really looks at many exciting details.

Overall, Rattle was clearly influenced by the historically informed movement, and the BPO doesn’t sound like during the Karajan era any more. Everything is much lighter and transparent.

Does Gramophone read my blog?

I presume not, but it’s a nice coincidence that just a short time after I write a dedicated blog post about the piano transcriptions of Bach’s Chaconne, Gramophone releases a complete review of all historic recordings of Busoni’s transcription of the Chaconne. That’s great news for me as well, as there a lot of versions I haven’t checked out yet.

One very new one is also not yet mentioned in this review article, which brings us to this album.

If you’re a regular reader of my blog, you know that I’m a huge Levit fan. Not only I’ve praised his Bach/Beethoven/Rzewski album, but to me he is clearly one of my favorite pianists of all times.

He has a very particular style. There is a certain perfectionism (his outstanding technique clearly helps), but it is never going towards the mechanical perfection of some virtuosos, the perfectionism, particularly about timing, is always serving the music.

Levit doesn’t tend to be a virtuoso in general, he could easily be with his mastering of the piano, but he really never shows off. In many way, it is a very introvert way of playing which makes it even more interesting.

This album in many ways shows an even more intimate side of Levit. It is a very personal selection of music, from Busoni, via Schumann, to Rzewski and even Bill Evans. The common thread of the album can be found in the title, “Life”, as this album was strongly influenced by the death of a close friend of Levit.

The album starts with two transcriptions by Busoni of Bach originals. The Chaconne is a very good example of the intimate style I described above, in many ways it is the complete opposite of the somewhat overwhelming fireworks in fascinating recording of the same work by the young Benjamin Grosvenor. EDIT Dec 2018: A reader kindly pointed out to me that the Chaconne is actually Brahms’ transcription for the left hand, a much more subdued affair than Busonis fireworks. So basically this entire paragraph is just rubbish. I’ll leave the original text on just to alert you that sometimes I could benefit from doing some more background research when writing my reviews. In the meantime, take my notes with a grain of salt.

We continue with a rarely played variations work by Schumann, which makes me really hope that Levit will record more of his work. I’d love to hear his take on the Davidsbündlertänze or the Kreisleriana.

Another highlight of this album are the two Wagner transcriptions, from Parsifal and Tristan. I must admit not being a great fan of Wagner in general (this is actually the first time this composer even appears on this blog), but he clearly has written some great harmonies.

The album wraps up with one of my favorite compositions of Bill Evans, the simple Peace Piece from the 1958 album Everybody Digs Bill Evans.

There really couldn’t be a better ending to this very particular, personal album than this solemn, simple, but breathtakingly beautiful interpretation.

You can find it here (Qobuz) and here (Acoustic Sounds)

This is now the third and presumably album of an exciting series by three outstanding musicians.

The German violinist Isabelle Faust (yes, I’m a big fan, see here or here), the Russian pianist Alexander Melnikov, and the French cellist Jean-Guihen Queyras are all great musicians individually, but get even better when they play together.

An excellent example is their recording of some Beethoven Trios on Harmonia Mundi some years ago, and Faust’s and Melnikov’s collaboration on Beethoven’s and Brahms’ violin sonatas are among my absolute favorites (the latter made it as part of my top 5 classical albums in 2015).

In this particular project, the three have decided to attack Schumann, and to couple one of his 3 piano trios with one of his orchestral solo works, playing with the Freiburger Barockorchester under Pablo Heras-Casado, on Harmonia Mundi.

Faust started, coupling his piano trio with his relatively unknown violin concerto back in early 2015. I really like this album.

Some month later Melnikov got his chance to play the famous piano concerto (see my 4 star review here) with piano trio no. 2.

So here we are at release no. 3, focusing obviously on the Cello concerto, and the remaining trio no. 1. 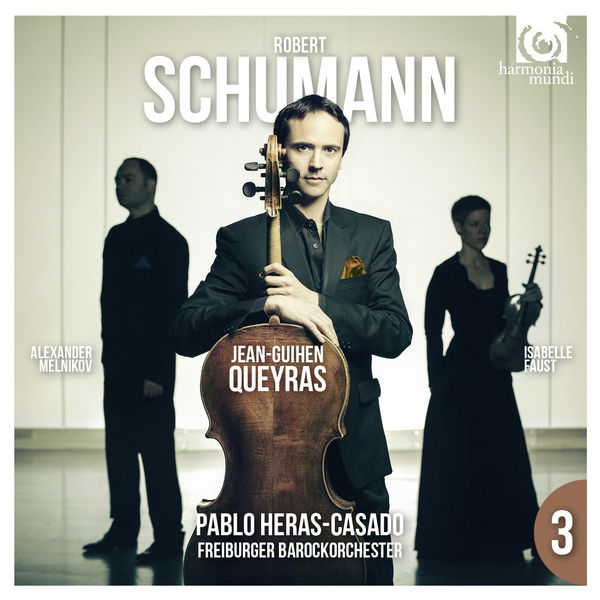 I expected quite a lot from this album, given that I really liked the two predecessors. However, on the Cello concerto I’m not exactly getting what I expected.

Schumann to me is one of the highest points of romanticism. I really like the energy, passion, and drama in his orchestral works. However, both Queyras and Heras-Casado chose a more subdued approach here, and I unfortunately constantly feel I’m missing something.

To explain what I mean, let me refer to my two personal reference versions for this concerto, by the legendary Jacqueline du Pré (playing with Daniel Barenboim), and even more, Janos Starker with Antal Dorati and the London Symphony. Do you hear the passion,  the power?

Maybe I just need to listen to the Queyras version more to get used to it, but so far it just doesn’t pull me in enough.

Obviously, we are talking about an excellent soloist (I really like his Bach Cello Suites for example) with a great orchestra, so fundamentally this remains a good recording, it is just not my cup of tea.

However, going back to the chamber music, all is well. These three trios, spread over 3 albums, will remain my reference version of these works for a foreseeable future.

You can find it here (Qobuz) or here (Prostudiomasters)